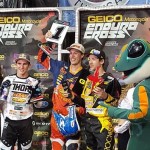 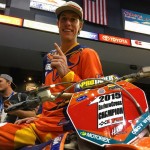 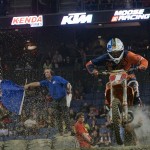 Ontario, California. (November 21, 2015) – The GEICO AMA EnduroCross series finished in high-octane, intense-action style as Taylor Robert took his first win of 2015 and Cody Webb battled through an aggressive track to hold a charging Colton Haaker at bay to secure the overall title. With the victory, Webb becomes back-to-back champion.

As the finale’s practices and qualifying went down during the day, it was clear the track would once again be a major factor in the outcome of the race. A speedy course with pro lap times in the sub 40-second range featured big-air jumps that had the field split into those who jumped and those who didn’t. Jumping was clearly faster if the rest of the lap was equal and consistent, but that is rarely the case in EnduroCross.

The night started off full of action as Rockstar Energy Husqvarna’s Colton Haaker took the first heat race win and a bonus championship point, tightening the virtual points gap between himself and Webb to only nine. Gas Gas’ Geoff Aaron took a smooth and fast second place while Factory Beta’s Kyle Redmond made a last-lap pass for third, transferring directly into the main. Both Aaron and Redmond weren’t jumping the firewood pile on the first straight but still putting in fast laps.

The second heat race saw veteran racer Mike Brown take his Rockstar Energy Husqvarna to the front early. Brown and longtime EnduroCross racer Jamie Lanza swapped the lead back-and-forth over the first lap, getting the roaring crowd on their feet. Brown would make a forceful move on the inside of an elevated rock turn for the pass just before a treacherous log obstacle-turned double jump. Brown lost momentum on the face of the takeoff and collided front-wheel-first into the landing, slamming into the bars. He would exit the arena with an injury. SRT-backed Cory Graffunder would pass Lanza for the win and Factory Beta’s Ty Cullins made a pass in the last few feet to take the final transfer spot.

The third heat race of the night was a precursor to the main event with Factory FMF KTM’s Taylor Robert battling with RPM/FMF/KTM Team Maxxis’ Cody Webb for the top spot. And while Taylor Robert won according to the finish line flags in a last-lap pass over Webb, it was discovered the top racers had actually done an extra lap. So, the scoring went back one lap where Webb was in the lead and the virtual points gap between Haaker and Webb evened out at a 10-point gap again. Beta’s Max Gerston finished in third—in the last lap and the “extra” last lap—and he went straight to the main.

During the evening Hot Laps, which puts the top two finishers from the three heat races on the track for a single lap against the clock to earn a bonus point and the top six gate picks for the main event, it was a showdown between Haaker and Webb. This is a valuable point and Haaker put down a heater of a lap that Webb couldn’t match. Haaker jumped all the tough gaps and Webb faltered. Virtual gap is now at nine.

When the gate dropped for the main event it was Lanza who ripped his KTM Powerparts two-stroke to the Nexen Tire Holeshot award with the rest of the pack stacked behind him. As he moved away freely, the rest fought for clear air and Redmond, Robert and Webb cleared out in good positions.

Haaker had first-turn trouble and started his fight for a championship in last place. As the first lap wound out, Redmond, Webb, Robert and Gerston were in a fight for the top spot.

By the second lap, Webb had moved by Redmond and started putting a gap on the field. Robert was pushing hard, jumping every obstacle nearly every lap and charging forward to Redmond. Meanwhile, Haaker was on the move from the back.

By lap four, Haaker had moved into sixth position, jumping when he had clear vision and blitzing everywhere else. Redmond had his hands full with a motivated Robert and finally gave up the second place position in the rock garden. Webb was racing a nearly perfect race up front and weaving through lappers on the same, fourth, lap.

On lap seven, Haaker had moved into 4th place—really pressuring for the podium with half the race to go. Webb’s lapped-traffic maneuvering was perfect, even allowing him to erase gains Robert was making by jumping big gaps at times as Robert became stuck behind slower riders.

By the ninth lap things began to shake up. Webb went down in the rock garden and stopped just long enough for Robert to get right next to him. Both riders moved out of the rocks at the same time and held it wide open to jump the finish line double inches apart. Robert would make the pass stick and Webb looked to secure a championship-winning second place. On the same lap, Haaker made the pass on Redmond for third and set his sights on Webb who had about a nine-second lead. Then, the rocks grabbed Robert and Webb got close again. Two big jumps later Robert had his lead back.
Haaker would catch Webb on lap 13 and put an aggressive pass move, making contact with his championship rival on the inside of a flat, sandy turn. Webb braked early, swung under Haaker and passed him over the flat tractor tires. Haaker would get stuck on the outside and Webb rode away with the championship essentially won.

Redmond had bike trouble late in the race and his race was done. His factory Beta teammate, Max Gerston moved into fourth followed by Graffunder rounding out the top five.

“It feels good to get another win and I feel like I should have a lot more of them by now but there are a lot of tough rider,” Robert said about his second career win. “I knew those guys were going to be fighting for the championship and that I could probably steal a win.”

“As far as the championship, I definitely felt a lot of pressure but I knew I have been riding solid all year and made good decisions,” Webb said. “It word out in my favor tonight. I felt like I wasn’t the fastest rider tonight but settling for second was OK because I won the championship.”

“I ended up third tonight but was the fastest rider several times with the Heat Race and Hot Lap,” Haaker Said. “I felt like I rode really well and more consistent tonight but the crash in the first turn put me back.”